History of the Faculty of Health Sciences 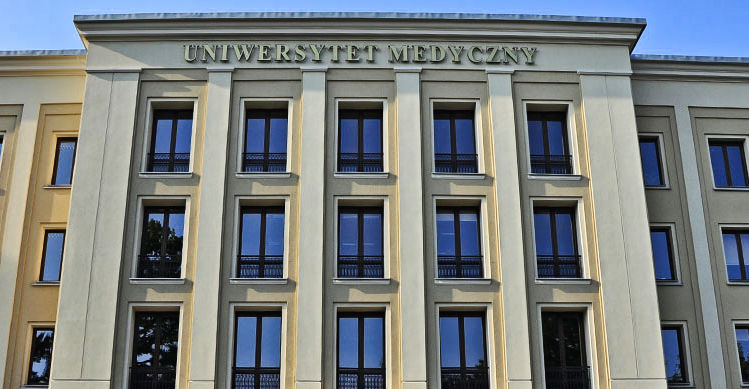 History of the Faculty of Health Sciences

On the 25th anniversary of the Polish People’s Republic, the confluence of a variety of trends and interests, including the communist ideology, civilisational progress, the dawning awareness of nursing professionals represented by trade unions and their numerous champions, as well as the efforts of the Medical Academy’s authorities (Prof. M. Stelmasiak, Prof. J Billewicz-Stankiewicz), physicians, lawyers and humanists, led to the establishment of the Nursing College at the Medical Academy of Lublin. (Directive of the Minister of Health and Social Care (MHSC) of 25 June 1969, Journal of Laws of the MHSC No. 13, item 40). Times were hard back then as eastern Poland struggled to recover from the aftermath of the not-long-past Russian Partition and wars, leaving many contemporaries to wonder – the echoes of these voices being heard to this day – why Lublin? 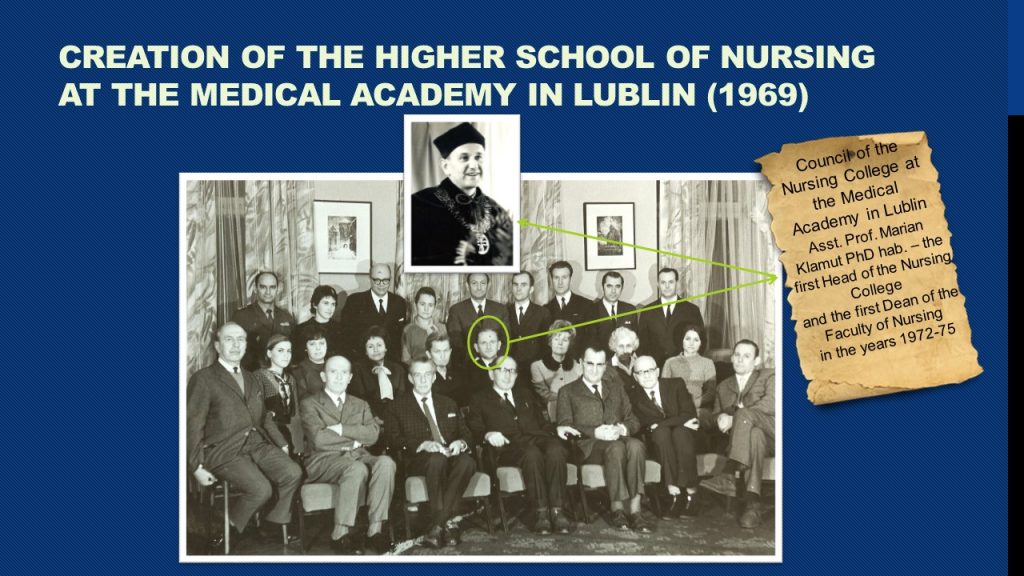 A group of respectable people under the leadership of Senior Lecturer Marian Klamut, the Head of the College, set about working hard on the curriculum and organisation. This was no easy task but after three years the College of Nursing was upgraded to the Faculty of Nursing, the only institution in the Eastern Bloc and the second in Europe to award the degree of Master of Science in Nursing (Directive of the Minister of Health and Social Care (MHSC) of 19 July 1972, Journal of Laws of the MHSC, No. 19, item 89). 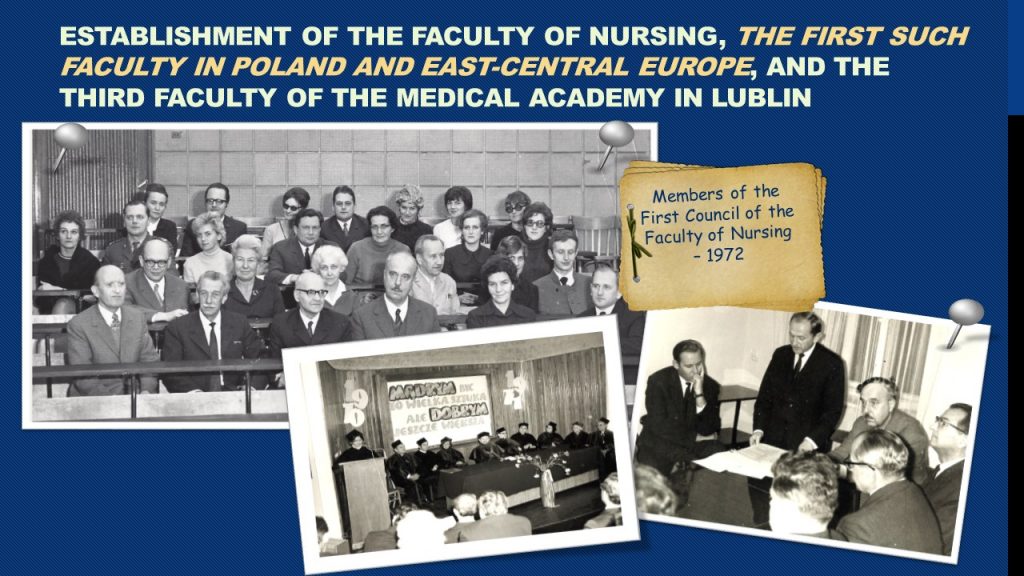 Looking through old newspaper clippings, we can take a glimpse into the great momentum of the endeavour that attracted interest from numerous organisations and associations. Just a few months after the College/Faculty of Nursing was established, the WHO sent its representatives there to contact the Academy in person. Soon after, the WHO arranged for teacher scholarships abroad and donated teaching materials (handbooks, journals, two phantoms and a projector). Over its first years of existence, the Faculty was visited by 30 consultants and experts from the United States, England, Belgium and France, and by a delegation of 60 representatives from 12 communist countries. Everyone shared the view that there was a legitimate need for graduate education in nursing, and also that nursing was not only a practical occupation and craft, but also a research discipline and scientific theory. Special significance should be attached to the April 1970 visit of two meritorious Polish nurses – Teresa Kulczyńska and Hanna Chrzanowska – who, jubilant about the achievement, wanted to gain a first-hand experience.

The numerous visits of experts from foreign schools, along with international scholarships for teachers and the best students, helped the Faculty to flourish.

The first four-year cycle of study went by very fast and on 16 November 1973, a few minutes after 10 a.m., a special session of the Medical Academy of Lublin’s Senate and the Council of the Faculty of Nursing was held to award the first Master of Science in Nursing diplomas to 47 graduates, all women. Soon after, they would receive 200 job offers, primarily for managerial positions in healthcare and teaching posts in nursing, which tells us a great deal about the demand for such professionals at the time. 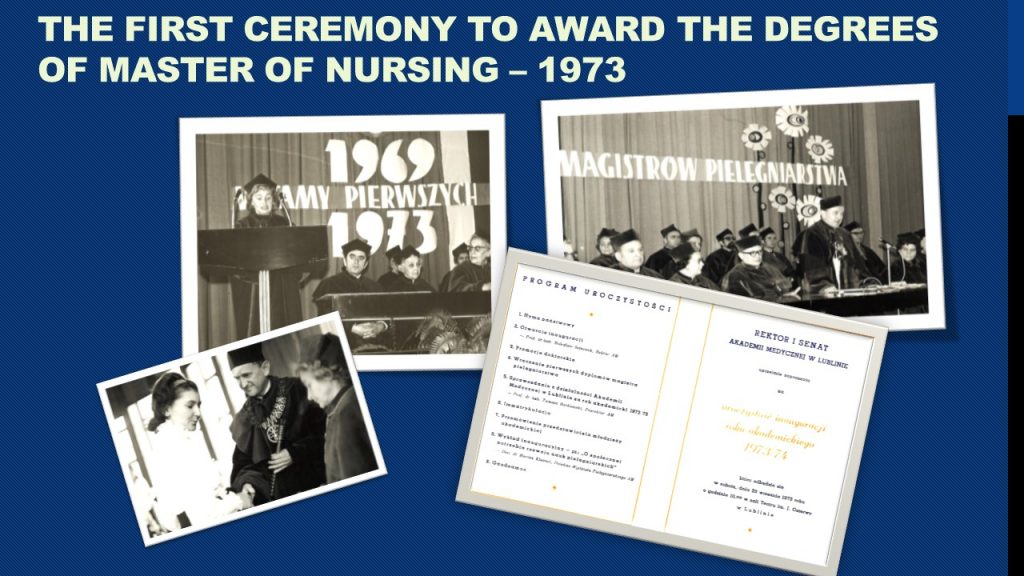 Later years were marked by further milestones as the Faculty continued to make advancements in nursing through continued commitment to helping its research and teaching staff develop. This led to the first doctoral degree, earned by Maria Majewska-Szczygielska, MSN (18 April 1982), the first habilitation of Helena Lenartowicz, PhD (1988) and the first professorial degree awarded to Irena Wrońska, PhD Hab. (18 October 2004). The high status of nursing was affirmed by the Medical University of Lublin’s award of the Doctor Honoris Causa title (1995) to Rachela Hutner – the co-founder of the Faculty and the first nurse in Europe to have received this distinction. 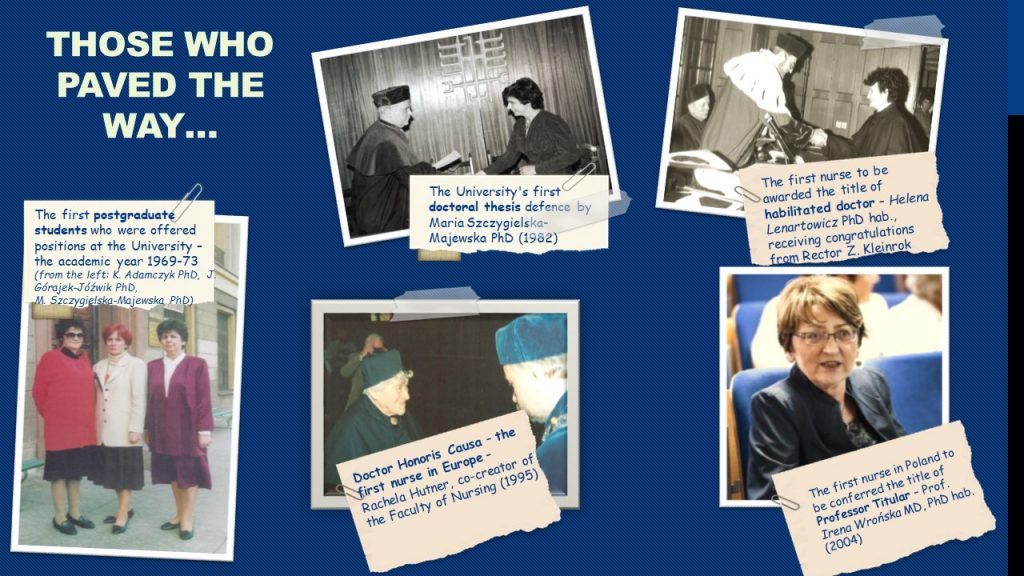 Starting from the academic year 2000/2001, the Faculty opened three-year undergraduate and two-year graduate programmes to bring the nursing education system in line with the European Union’s requirements. In 2012 all the programmes, except for physiotherapy, changed to a three-plus-two system in accordance with the Bologna Declaration ratified by Poland.

Over the past half century, the Faculty had seven Deans with professorial degrees, including two women, Nurse Professors. The Faculty employs 234 people under employment contracts, including 11 Full Professors, 24 Habilitated Doctors, 131 Doctors, 62 Masters and 6 physicians. So far, a total of 9,512 Master’s degrees have been awarded by the Faculty of Health Sciences, including 5,316 to full-time graduates and 4,196 to part-time graduates, and a total of 169 PhD and 11 habilitation programmes have been completed (as at 22 November 2018). 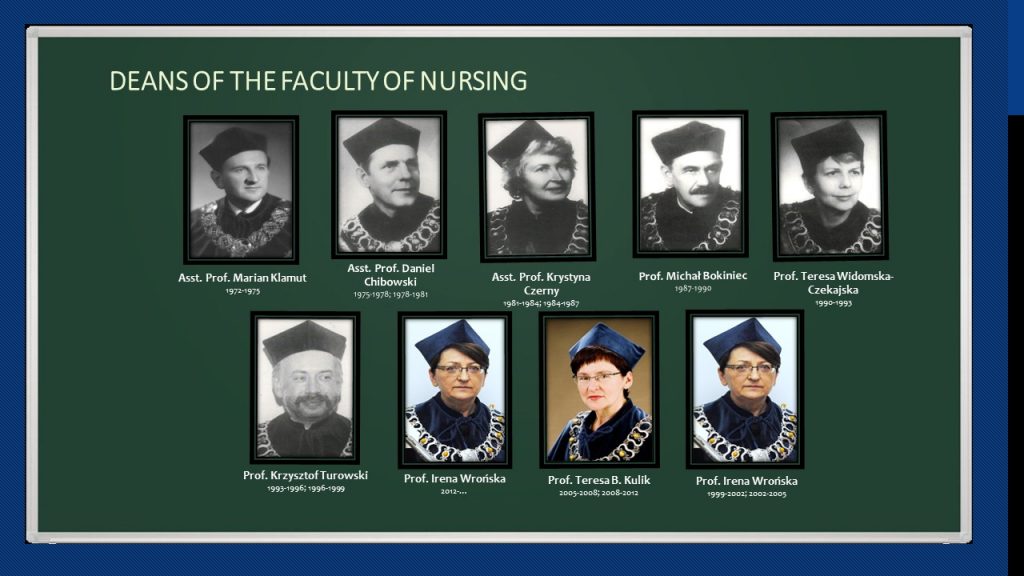